When parents have two (or more) languages, they often discuss whether they should introduce them to their children. They wonder if it is confusing for their little ones to hear two languages spoken in the home environment, and may worry that it’s too difficult for their young children to learn to speak both their native language and English also. In fact the opposite is true!

Babies are born able to hear the sounds of all languages, and are able to link together the ‘like’ sounds which they hear, in their brain – eg they store Danish sounds together, and the English sounds together. Isn’t that amazing?

It’s been found that children who have two languages spoken in the home tend to be more creative and more flexible in their thinking than children with just one language!

Let’s assume two languages are spoken in the home by the parents. Ideally Mum would speak her native language to the child, and Dad would speak his language, eg Mum speaking German and Dad speaking English.

What’s the best way to teach a second language?

A young child will ‘recognise’ that Dad speaks one way and Mum in a different way. The child will very quickly learn that each item has two names, depending on the speaker. Eg table and ‘tafel’ or apple and ‘apfel’. When each parent uses their own language, this prevents the baby/ young child from becoming confused. This seems to be when parents fear they are overburdening their child with double the amount of words. But, by using their native language, they are assisting their child to become bilingual, which is an asset in our global, multi-cultural society, and the baby’s brain can manage this input.

When your baby begin to speak, he may mix the two languages in a sentence as he learns to correctly put the words together.

You may find that he doesn’t initially reach the milestones for language development – which are based on one language, but by about 2 ½ – 3 years of age he will be able to have regular conversations within both languages.

Children use contextual clues to identify which language to use. Eg If the child has learnt both German and English, then when a German person says: “Guten Morn” (Good morning), the child knows to speak in German, not English. 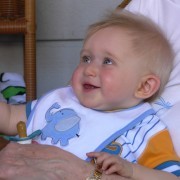 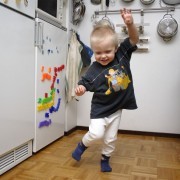 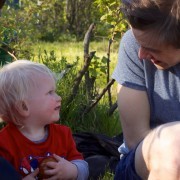 The TERRIFIC Two’s
Scroll to top