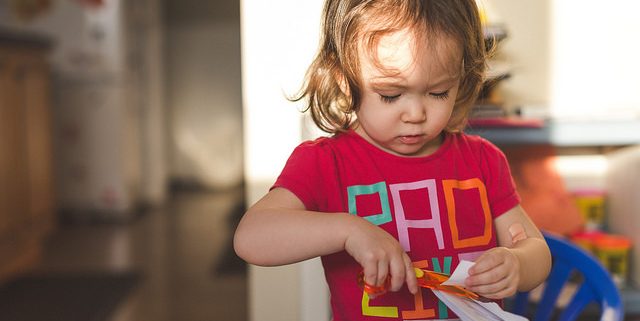 Three year olds can cut using scissors. If you have a three year old child, you know they are fascinated with scissors and their potential to cut anything and everything from paper to clothing and hair!

Using scissors requires a lot of skill and fine motor development, and these start to develop well before the age of three.

How do you help your child develop the muscles in their hands?

Anything which involves squeezing or pinching type actions will be good, for example:

Regular play as above will strengthen the small muscles in their hands, ready for scissors and writing.

What are the steps in learning to correctly use scissors?

How do I minimise ‘damage’?

I always remember visiting a family whose three year old daughter, Brodie, presented with very short hair. Mum explained that she had been cutting her husbands’ hair in the evening, and forgot to put the hairdressing scissors away, leaving them on the kitchen bench. The next morning Brodie found them while Mum was putting the baby to sleep in another room. Brodie decided to cut her own hair, just like she’d seen her mother do. She was so pleased with her hairdressing skills, such that when Mum came back into the kitchen and saw the new hair-do, Brodie proudly asked: ‘You like my new hair?’

Over time, with practice and encouragement, they will soon be able to cut in lines, and around shapes such as circles or pictures from a magazine.

How do I Talk to my Children about Death?

What do I need to know about toilet training my toddler?
Scroll to top